Last night, I noticed for the first time since before my gallbladder surgery that my ankles were swollen. They weren’t humongous but they looked like Mother’s used to.

This afternoon, they were getting on the puffy side again. I pulled the footstool over to Mother’s chair (it goes with it, anyway, but my computer table makes it hard to use it here) and angled it so I could put my feet up. It helped and Twinkle is enjoying lying where the breeze from the fan hits her.

I haven’t done a lot today that required much moving around. Exercise was accomplished with two fans blowing on me, both as high as they would go. It’s cooled off a bit now. From a high of 83.8, it’s “down to” 83.3 where I’m sitting. I’m glad my waterbed is cool. The OAT* supposedly got up to 100 degrees (well, 99.7) but that was in the sun.

Cousin told me yesterday my CIL would be here today. He must’ve been because the Catz have been using the deck to stay as cool as possible but haven’t been begging for food.

This is an old picture but it shows what I had for supper minus the cilantro. After I’d agonized over not having any, I bought some but it rotted before my mangoes got ripe. 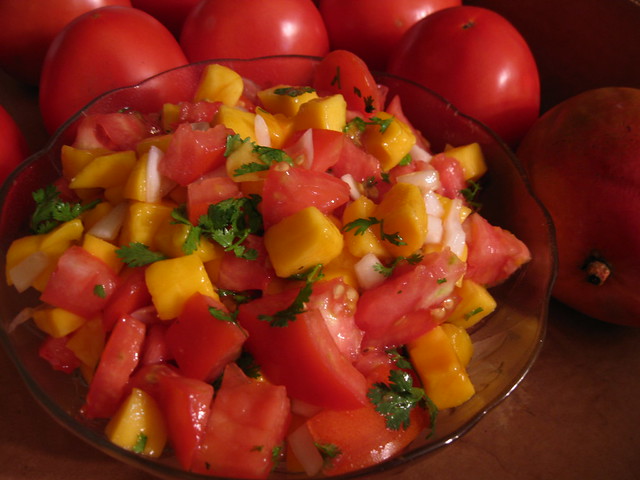 I made it with champagne mangoes and Campari tomatoes. It was good but the cilantro was missed.

My Rocker Rx sandals may have found a new home. DIL2 will be doing a lot of walking when the Pathfinders go to the International Camporee at Oshkosh. I’ve been trying to sell her on MBTs (there’s no comparison) but I don’t think she’s willing to plunk down the $$. I told her she could have the two pairs of Rocker Rx (one black and one brown) if she wants them. She said she’ll try them. Now to get them to her…

I’m trying to curb my spending since I’ll probably have to pay both my inpatient co-pay and car insurance in July but I got tired of having my back wet when I drive anywhere in hot weather. I bought myself an airflow seat cushion. I put it in the car Friday and used it for the first time going to and from church (and the nursing home). I do believe it will help.

Two more days and Genese will go to the Mother Ship for a CT. Hopefully, it will help determine what’s going on in that body of hers.

The lessons did go live yesterday. I got another one finished and uploaded today and will complete the next one before I go to bed.

Well, that’s about it for my part in World History. It’s down another .2 degrees. I may have to put the fan on a slower speed.

*Outside Air Temperature (DH’s influence on me)