Maybe Mama Six wasn’t happy with my getting too familiar with her offspring or maybe Someone hauled the three away but I haven’t seen hide nor hair for two days. The last time I saw any of them was when I was watching the Kittenz (they were SOOOO CUTE!!) and bashed myself in the face and shoulder with the garage door. I looked and looked for them yesterday but didn’t find them.

There are all sorts of nooks and crannies where they could hide around here and I went into a lot of them. Some are downright spooky and probably inhabited by all sorts of spiders and snakes but I was hoping to find the Kittenz. No luck.

I gave up and came back in the house after feeding the rest of the critters. Today was fellowship meal and I planned to stay so I fixed my offerings. I made carrot cupcakes 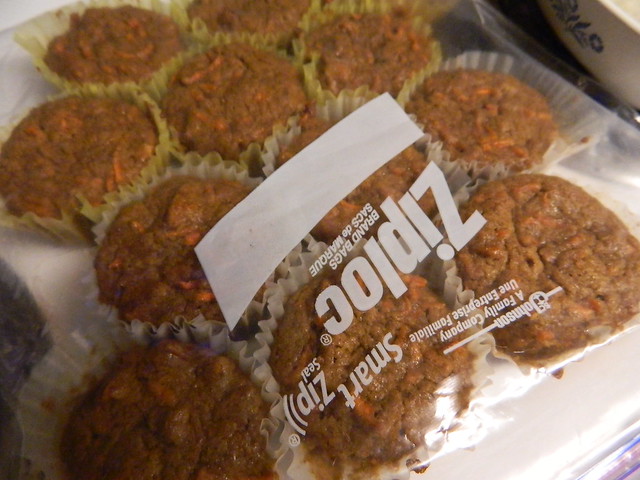 and had enough batter left over to have a little carrot cake for me. This is after it was iced with Daiya cream cheese icing. 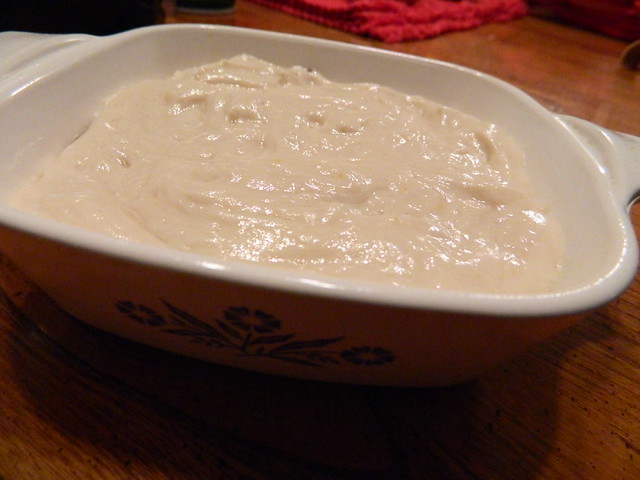 I’ve been asked for the recipe for the icing. It’s just the standard 8 ozzies cream cheese, lemon juice, zest, powdered sugar (I can’t find vegan around here so I made my own with organic evaporated cane juice), vanilla and a pinch of salt. Everything is to taste. I’m a “dump” cook. I whip everything together until fluffy with a hand mixer.

Besides that, I grated the veggie roll in the food processor that still had bits of carrot in it, chopped up some celery and mixed in the cashew mayo left over from the picnic. It’s supposed to keep for two weeks in the fridge and it was well under that threshold. I’d planned to use the rest of the organic Vegenaise but it’s too nasty for words. I flushed half a quart down the commode and watched my money go down with it. I’ve let Follow Your Heart know what I think of their disaster. When I bought it, I was told the texture was “a little bit different”. It’s a LOT different and gross.

The bed got changed, a bath taken, lessons worked on (the deadline for going live is tomorrow) and another project readied for Monday. That’s not all I did but I won’t rehash every single thing. I remember when my sister would enumerate what they’d had for a meal and it would end with “bread, butter and salt”.

I was in bed much earlier than usual and slept well. It’s been cooler the past few days and from what I saw this morning, it had rained again last night.

I’d left in plenty of time to be at the church before song service—even allowing for unloading my food. However, there was a person in a tiny red car going down the mountain and I got stuck behind. The driver must’ve been paranoid of driving on that curvy road. The speed would drop from 25 to 20 to 15. It was 9:10 when I pulled into the parking lot and 9:17 walking into the church.

Looking forward to being a Free Person, it was much less stressful playing today. However, the church was cold enough (again) to hang meat. I think it isn’t only the Men in Suits, it’s the Women Experiencing Menopause. I have no idea what the thermostat was turned to but I had to go outside to get warm. I’d worn my shirt-jacket and wished I had my winter coat.

When I stepped outside the door, the air felt so good! The Cavalry and the head deacon were talking but when I showed my face, C. came over and said he’d learned only the night before that I wasn’t planning to play the organ after this month. Seems it took several people by surprise, including the pianist.

I told him I’d played most Sabbaths for more than 25 years and I was burned out. He asked if I would consider playing one or two Sabbaths a month or cut back on what’s played during the services. I feel kind of like I did when I retired from the hospital and was asked to be backup for the nursing home bookkeeper. I wanted a clean break. Rather than stand there and go back and forth, I told him I’d think about it. Believe me, I’ve thought and prayed already.

The services went off okay and I lived through it. I was looking forward to hearing one of the ladies speak but it turns out she had the children’s story and someone else spoke. I’m so glad I’m not the bulletin secretary. I’ve put in my time there, too.

After church, the pianist came over and sat down on the organ bench beside me. Was I serious about not playing the organ? Yes. I’m tired. I’m burned out. I need a break. She told me she felt like I make her play better. Well, I don’t know if I can be credited with that. When I reached for the key to lock the organ, she was in tears. I felt bad. She’s played the piano almost as long as I’ve played the organ but we all have to be put out to pasture at some point.

When DD and I moved here from Alabama in August of 1986, my father-in-law didn’t let the grass grow under his feet. He went to whoever was in charge and let them know his daughter-in-law played the organ. As soon as I transferred my membership, I was called upon to take multiple offices and I accepted all of them. I think there were five. I’ve learned since that wasn’t a good idea whatsoever.

One of my cousin’s school chums visited us accompanied by her mother and two sons. They stayed for the fellowship meal. When I was gathering up my dishes, the Computer Owner took me up on my offer to take the rest of the spread plus a lot of crackers. I came home with one cupcake that had crumbled when I tried to slice it and the remainder of the icing.

There was going to be survey-taking after the meal but I’d made plans to see Genese. I took her an iced cupcake (I’d served the icing separate from the cupcakes and let people take as little or as much as they wanted) and we caught up. I don’t know what time I got there but it was after 4 TT when I left.

I pulled up to my cousin’s house to feed the critters and still no sign of Six or the Kittenz. That done, I came on home. Twinkle was asking for food but she still had a bit. I let her know when she ate that, she’d get more. In the last four hours, she has eaten as much as she did in four days six months ago.

Twinkle is nudging my feet again. Surely she can’t be out of food. Then, again, she’s getting to be the Bottomless Pit.

I Apologize
Do the Mashed Potato

4 Responses to Four Catz, No Kittenz