if I mislead you. My sister commented that she was glad Genese was back in the game. I guess that’s what one would gather if one just skimmed the post and didn’t read the part about why I was notified and how I won the game (which I really didn’t).

Genese has been in touch with me about her condition. She is on a strong diuretic which saps her strength to the point that she can’t stay awake to do much of anything. We are going on hiatus, Wordscraper-wise. I’ve conceded the last game standing and when Genese feels up to it, we’ll start playing again. I can surely live without Wordscraper in the meantime. So now, I’ve won a game with the low score and Genese has won a game with a low score so we’re even. 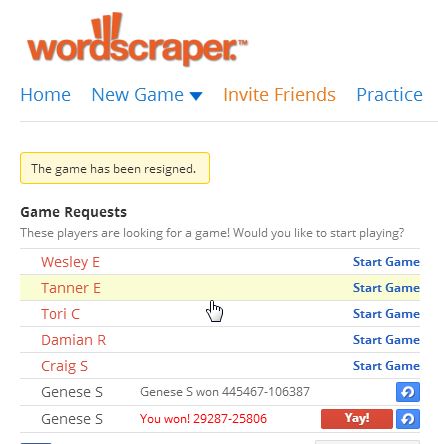 I have no idea who those other people are. Here’s the board we were playing. It was in honor of Memorial Day. 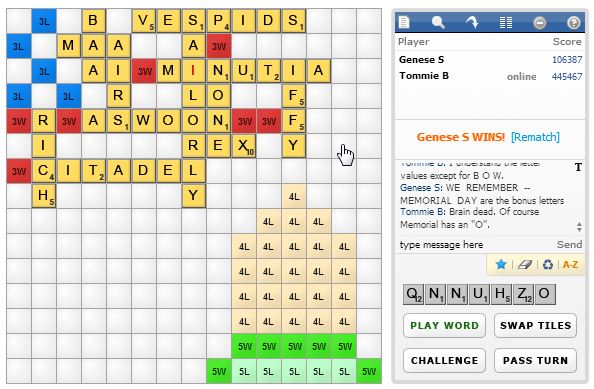 It’s rained off and on. I’ve done laundry and worked on the mobile version of the lessons, completing one.

Sabbath is the second in the month so that means a church-wide fellowship meal. I went to get a veggie roll from the freezer so it could be thawing. When I was closing the garage door, I was watching for the kittens rather than what I was doing and I pulled it down, whacking myself on my right cheekbone and shoulder. I don’t think it’s bruised but it hurt for a few minutes. They are a little tender.

The Catz had been fed when I checked so I assume the babies had been, too. I hope I’m right.

Today would have been my oldest nephew’s birthday. I’d thought about it when I got up this morning. It’s hard to realize he’s no longer with us. The family is slowly dwindling. It was also my father-in-law’s birthday. Had he lived, he would have been 112. 🙂 Compared to Methuselah, that’s a mere youth.

The gray kitten had one eye open today and the other glued shut. I just left it. I figured maybe Mama can take better care of it than I can.

Twinkle is in dreamland. That’s where I’m going soon. I may try to finish another lesson first and then again, I may not.

Winning When I Didn’t
Four Catz, No Kittenz

2 Responses to I Apologize