Last night, I promised a post about the day’s activities and I’m here to make good on my promise. If there’s one thing I always try to do, it’s keep my word. So here goes…

I’d been up very late the night before so I wasn’t in any hurry to get up. As it was, it was earlier than usual. I was seated at the computer finishing up my quiet time when the phone rang. It was one of my nieces. They were lost. Trying to find Ye Olde Homestead, they’d ended up ‘way past where they were supposed to turn. When I told her to backtrack and take the first road to the left, she could hardly believe it. That little road? Yes, that’s the road your granny’s house is on.

Well, they turned around. Going down the road, I talked them through it until they saw something they recognized and then there it was! Granny’s House! 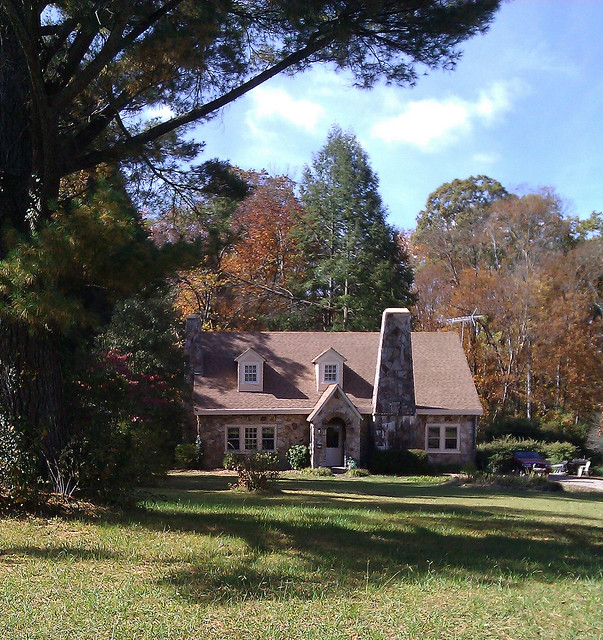 We signed off but I found out later that they went to explore. The people who own it now weren’t home. One of them marveled at how small the entrance is. As for the road, I guess it seemed like a highway to them when they were children. I’ve found that, the older I get, the smaller reality is.

I was full tilt getting food ready to go. Out of self-defense, I fed the critters. I didn’t need to be tripping over them. I was determined to get everything done and get out of here in time to go by to pick up my prescription and top off the gas tank. Getting to the park by 2:30 TT was priority. I’d had a bath the day before and didn’t stink (at least I don’t think I did).

Stopping by the university supermarket, I bought the roll of paper towels I forgot to grab before I left the house and then it was on to the park.

It was 3:20 TT when I arrived and wasn’t surprised I was the first one there. The gates were open so I drove on in. I parked in the Loading and Unloading Only Zone since I was going to be unloading soon.

I sat down at one of the six picnic tables to wait. Minutes later, I saw a man walking up the drive. He looked familiar. It came clear why—it was DS1. I hadn’t expected him to get there for another half hour or so.

We visited and soon a little red car parked out at the road. It was the Nieces from Far Far Away. There were hugs all around and then we sat down to catch up. But not before one of them could get a picture of DS1 and me. 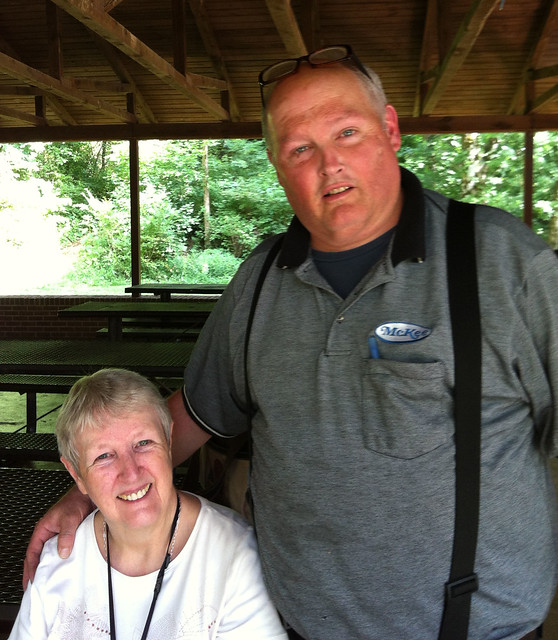 I kept checking my watch. Where was everybody? I’d counted 14 if all of us showed up but only four were there so far and time was a’wastin’. The niece that had been on the planning of the outing was nowhere to be seen. The last time I’d called the house, her son had told me she was in the shower.

One of the Nieces tried calling her cell phone with no luck. DS1 took my car and drove around thinking she might have thought we were meeting somewhere else. He came back and had nothing to report.

An hour and a half after I got there, my nephew and his family drove up. When I wondered again where my niece was, my nephew said, “Well, she said to be here around 5-ish.” That was the first I’d heard. When we’d talked, we said we’d get there by 3:30 and have the meal set up by 4. Oh, well. Couldn’t do anything about it then.

My great-niece had just come in from a trip to NYC and was all excited. She had seen lots while she was there and must have been on the go most of the time but she was still energetic. Youth!

There was more picture taking. I was skulking around, trying to stay out of the way of the camera phones but didn’t do a very good job. It would take longer than I want to stay up to link to the pictures my niece sent me today so I’ve put them in a Flickr album here. These are from just one phone. There are lots more drifting around. I feared my cheeks would get tired with all the smiling.

Finally, the Planner Niece arrived but the rest of the food and trappings weren’t there yet. They were coming via her daughter and son. When they got there, we started getting the meal put on the table.

Periodically, the younger Niece from Far Far Away would want to sing. We dueted on “Farther Along”. Just so you know, we sounded better. 😀

After the blessing pronounced by DS1, we laid to and filled our plates. There was lots of food with some leftovers. I filled cups for DS1 with guacamole, potato salad and marinated cucumbers. I sent the rest of the cucumbers home with my Planner Niece.

Off and on, we’d wonder where DIL2 was. She’d been invited and indicated she intended to come but she never showed. I posted on her wall today that she was missed. She was under the impression it was Tuesday. Guess I should have taken the responsibility to notify her.

A man had stopped and was talking to DS1. I didn’t pay any attention until I was called over and asked if I recognized him. He was standing with the sun behind him and it wasn’t until I got close enough I realized it was the pianist’s son—one of DD’s old schoolmates. He used to be a real stringbean but he’s grown into a tall, handsome man. He’s Assistant Director of Landscape Services at the university so he’s doing okay for himself. I told him we were having a family reunion and that I’d reserved the pavilion until 7:30. He indicated he’d have his men leave the gate open for us. He’d thought they had forgotten to close it.

There was more picture-taking and singing (my nephew, nieces, DS1 and I sang “Jesus Loves Me” and harmonized). A few left here and a few more there until it was just three nieces and me. I had over an hour drive home so I hugged all around and left.

I’d planned to go to the university supermarket and get bananas but they were closed by that time. Bi-Lo wasn’t too far out of my way so I went there and got what I needed.

It was almost dark when I pulled into the driveway. I’d turned on the outside light before I left and was glad I had. When I’d flipped the switch, I had no idea I’d be gone that long.

Today hasn’t been busy. I’ve unloaded and loaded the dishwasher, fed Twinkle and the critters, exercised, completed the 10th lesson of 26. As a treat, I watched “My Louisiana Sky” and found I could have streamed it on youtube for $1.99 but it’s one I’ll watch more than once. Or twice.

DS1 called. They were on an enforced 30 minute break after eight hours on the road. I guess he figured he’d use the time to check on his aged mother and make sure she was okay.

Genese has had another birthday. She’s 56. The doctor put her on a stronger diuretic and she’s down by more than 30 lubs. It makes her very tired and sleepy so our Wordscraper games are on hold. One hasn’t been played for five days and the other 10.

My Facebook page reached a milestone. It now has 100 likes.

Twinkle got a good brushing this afternoon. I hope that means at least one less hairball. It would be nice if she’s shed all she’ll shed until next spring but I believe that wish is in vain.