There have been some gorgeous days lately and yesterday was one of them. I was waiting for more than four strawberries to get ripe so I could have shortcake. I went out to the grow box with a bowl (hope springs eternal) and found these: 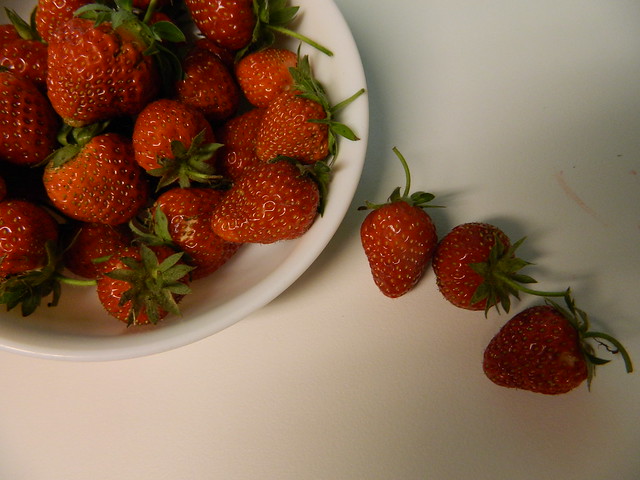 I decided my first shortcake should be part of my Sabbath celebration so I put them aside.

It was hot in the house but I cranked up the oven anyway and set about making the shortcake, itself. I don’t know what I did wrong. I measured everything correctly but the mix came out thin and runny. I ended up putting in another whole cup of flour which made the resulting biscuits (that’s what they really are–sweet biscuits) kind of doughy.

I might point out, too, that the mouse smell is back in the oven. I hadn’t used it since the day before I went to Kentucky so I don’t see how it would have gotten contaminated again in that length of time.

Before, after and during, I was doing other things.

There would be no services at “my” church. I posted on another Facebook page and asked if another close by church would be operational. Yes, and I was given the name of the speaker. I looked him up on youtube and it seemed promising.

After checking to see if the meteor shower had started (if it had, it was obscured by clouds) (the only things I saw twinkling were lightning bugs) I went to bed. Off and on, I checked throughout the night but still could see nothing—not even moonlight.

I was up by 6 and had a leisurely time getting ready to go. I intended to get to the church by 10:45. That is traditionally announcement time in most Seventh-day Adventist churches.

When I walked up to the church, I could hear singing but no playing. Going inside, I veered off to the right and went to the bathroom. While in there, I debated about whether to stay or leave. I did not want to be prevailed on to play an instrument. The last time I played the organ there was when we had my mother’s memorial back in January, 2005. I’d put in many an hour practicing before I was comfortable playing with people present. As for the piano, I’m so out of practice it isn’t funny.

Washing my hands, I took a deep breath and made my way to the sanctuary. I was delighted to see someone I knew sitting a few rows from the back so I went and sat beside her. We didn’t work together but she was my former doctor’s nurse and I always had a great deal of respect and admiration for her. She seemed as happy to see me. All told, there were maybe a half dozen of us present including two young men I knew at the mixing board.

That number changed when the people came in from other departments. There still weren’t as many as would be there on a typical Sabbath but there were a lot more and—sure enough—one of them came over and asked if I would play. I smiled and said I was on vacation and then explained I hadn’t played that particular organ in more than nine years. And, no, I wouldn’t play the piano. A man played the guitar for the accompaniment and it was nice. And I was part of the congregation for a change.

The speaker was as good as he is on youtube. It didn’t seem to matter to him that the noon hour had come and gone. He’d finish when he was ready. After he got through preaching, there was a season of prayer with several taking part. The admonition that public prayer should be short and to the point was thrown out the window. I couldn’t hear what was being said except for the fervent “amens” but they weren’t talking to me, anyway.

Not taking the parishioners up on the invitation to eat sandwiches and watermelon, I came on home. I had the fixins’ for strawberry shortcake. I set about getting it ready.

The berries weren’t sweet enough to eat without some added sugar. I used evaporated cane juice. I let them stand so there would be plenty of juice. 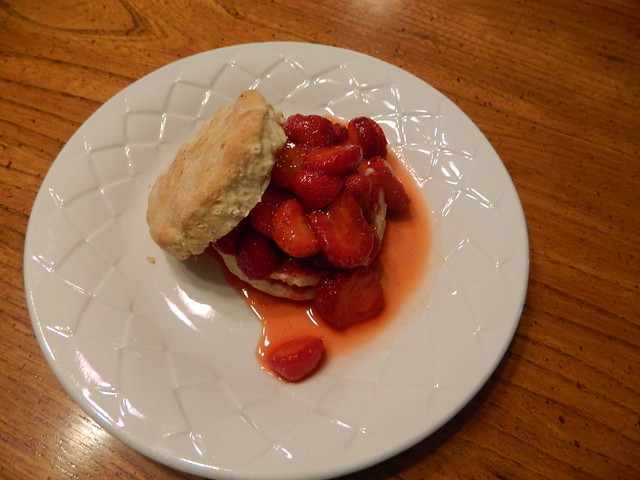 Then I added some more berries to the top layer. 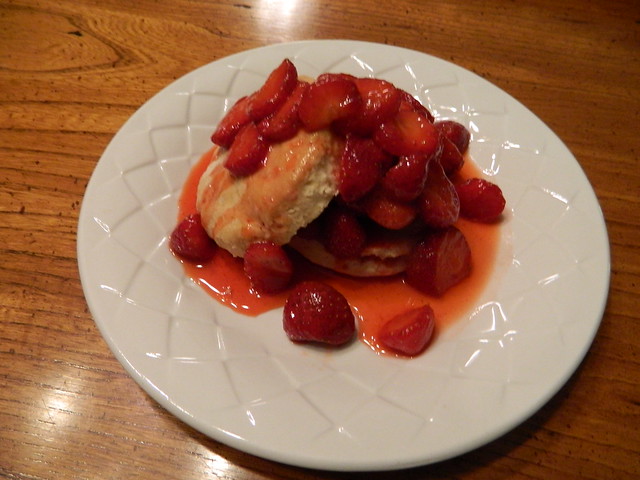 Last, I put some sweetened Daiya “cream cheese” in place of whipped cream. I have some coconut milk but it has to be chilled to whip and it wasn’t in the fridge. 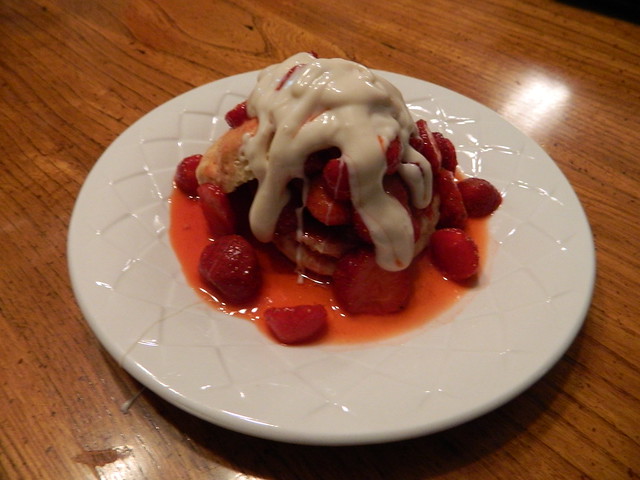 It’s looks like mozzarella that’s been melted and poured on. It tasted better than it looked but I’ll probably just eat it plain after this unless I get out a can of coconut milk and chill it.

It would be nice to have some good Tidwell berries but I haven’t called to see where I can get some without going to the farm.

Twinkle and I have had a nice afternoon. I even did something I never do. I lay down and took a nap. When I woke, it was almost 7 TT. I still feel a bit groggy.

Speaking of Twinkle, the Boss has been nuzzling my feet. I guess that means she needs more food. Between her appetite and my bills, my bank account is going to be clean as a whistle.

For the first time in almost a week, I got the mail out of the box. It included a bill from the hospital for $550 and one from the physician group for $269.25. I’ll pay the former. The latter is being appealed so I’ll call and let them know what’s going on.

In the meantime, I need to get more sleep.

Living Dangerously
You Know What Happens When You Assume.