One of my Facebook friends posted a picture of a cherimoya that said it’s a cure for cancer. I’ve eaten cherimoya before and wasn’t that impressed. I’d much prefer paw paw (which is in the same family) and if I can find someone with a patch, it will be much cheaper than the $6 each I paid for its cousin. I directed her to my post that shows pictures of a paw paw.

Speaking of cousin, mine called today to let me know she’d taken care of the critters. I hadn’t heard her drive in (or out). It’s rained off and on all day today so I was glad not to be pressed into service.

The temperature has dropped considerably. It’s 64 outside. That will make for good sleeping weather. Maybe I should put another blanket on the bed.

I’ve uploaded another file to the ssnet server, done laundry, run the dishwasher, took a bath, cut my toenails, rebounded and on and on. I’ve fixed food and eaten it, too. I had one of the stringy mangos and it was pretty bad. It had an okay taste but eating and flossing my teeth at the same time isn’t for me.

When I did the screenshot of the Mother’s Day board Genese made, I hadn’t noticed her note. I went back and did another this evening. 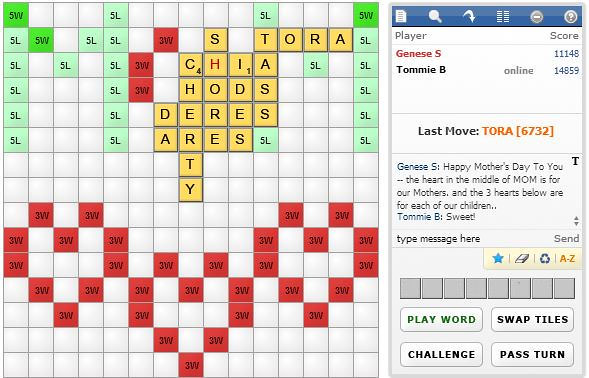 Of course, I couldn’t let her know the letters in my tray so I blanked them out.

My sister took the notebook to our other sister’s house and it connects to the Internet just fine there. So the mystery goes on. I advised them to leave it on tonight so it can update. It’s been offline for so long, there’s no telling how long it will take.

Well, it seems it’s a small world, even on the WWW. A reader surfing along happened upon my blog post about going to prison on Monday. The picture I’d snapped of the exit was recognized as Berea. It is her hometown. Talk about serendipity! I snapped the picture on a whim, chose to put it up on another one, she happened across my blog in a sea of blogs and the rest is history!

Twinkle has gone looking for food. I wish what she eats would put meat on her bones but she seems destined to always be a skinny cat.

The Day After
It’s Blackberry Winter