I woke at 5-something because the sun was coming up. It wasn’t because I wanted to. I got up, put a blanket over the comforter (yes, you read that right), donned my mask and went back to sleep. The heater for my waterbed is off 24/7 now and I’d gotten pretty chilly but warmed up nicely. I woke again at almost 9.

The sun’s been in and out today. When I’d think I could cleanse my body, a storm would come through. I finally figured I could stand myself for one more day.

Genese’s son-in-law, Adam, posted on Facebook that he has his new legs! He’s been able to stand for the first time in two years. I know he’s going to do well with them. He has the determination it takes to see it through.

My “new” isn’t quite so exciting. I’d ordered another pair of MBTs that were on ebay. They came today. Even though they are used, they aren’t badly worn. Costing much less than my first pair, they are a real bargain. This is what they look like: 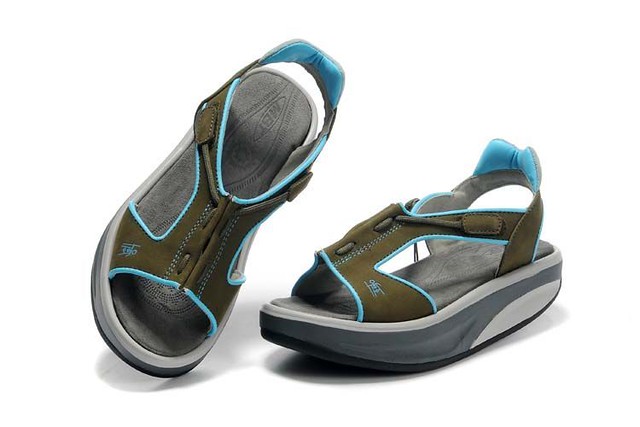 I had $9 worth of coupons that would be expired before I could use them if I wasn’t careful. I bit the bullet and went down today to take care of the situation. So…now, I have six half gallons of Silk Protein+Fiber Almondmilk in the fridge. I’d hoped to get a date that was farther out but 06/06/2014 was the best I could do. I remember that my in-laws would freeze cow’s milk when they could get it at a good price. I wonder if I could do that with this?

My favorite produce guy was working. He is an expert watermelon-picker-outer so I put him to work. I haven’t cut the melon yet but it surely is heavy for its size.

The gas tank needed filling. I’m in the habit of figuring up my gas mileage every time I top it off. It was down a bit today at 35 mpg. Now I know that, from the gas station to Walmart and then home, it’s exactly 11.5 miles.

When I tried on my MBTs, I left them on and wore them to town. They are definitely a breed above my Rocker Rx sandals. I can tell a real difference. The Rocker Rx make me walk faster. These actually make me work harder. I’m hoping I won’t have leg cramps tonight but I’m prepared if I do.

After I got back from town, I stopped and fed the critters before I unloaded. Not long after I’d gotten everything out of the car, here came yet another storm.

Now, if I were rich, I’ve found the car I’d love to have. DD posted this on Facebook. Call me a prude but I think he could have used different language here and there but it IS interesting. I won’t spend a lot of time wishing for a Tesla since the base price is around $72k for a 2013 model and it can top out at around $100k. I guess my little Honda Civic will have last on and on.

It’s been around 80-ish in the house. 92 was the high for outside but I don’t think it actually got that hot. I’m still waiting for the really hot weather to see how it goes without the a/c.

Setting Off the Alarm
Living In the Past

2 Responses to The Day After