You are here: Home › Blog › Raw Food Daze › Disturbed, Disgusted and Disgruntled
By Tommie on May 7, 2014 in Raw Food Daze

That’s what I could be if I let myself and, to tell you the truth, I was for a brief period of time today. I got a grip, though, and it soon passed. I’m getting ahead of the story, though.

Last night was much more pleasant sleeping than the night before. I had the bathroom window open and one in my bedroom that sent a cross-current right over my bed. It was helped by a small ancient fan.

After I did all my morning stuff, ate breakfast and took a bath, I got dressed and made ready to go forth and shop. One last chore was to sort through my coupons and put the ones I planned to use today in the front pocket of my little accordion file I carry in my purse.

The skimpy lightweight robe was going back so I grabbed a Walmart bag to put it in along with the receipt.

When I got in the car, I noted it was covered with a thick layer of pollen. I’d asked for a pollen-colored car when I was looking but it did little to hide the fact it desperately needed to be washed.

My carwash of choice is one in town. The initial fee is $1.25 in quarters. When it starts getting close to running out of time, another quarter or two can be inserted to extend it. I carry a little plastic bag of change in the coin holder in my car. When I reached for it, there were exactly five quarters plus some nickles and dimes. That was okay. I could use the change machine with a dollar or two I always carry in my coupon organizer. I unzipped my purse, reached in and—the organizer wasn’t there! I’d left it on the table in the kitchen.

Being 10 miles away from my house, I considered (for just a moment) turning around and driving an additional 20 mile round trip to get the organizer. Then my better judgment took over. It would take about as much time and gas as I would save with the coupons. Actually, it would take MORE in gas than I would save because the ones for the toilet paper I was going to buy were 25 cents each. The others could wait for the next trip to town.

There was no way I could wash and rinse the car with $1.25 so I opted to just rinse off all the pollen and other gunk I could before my time ran out. It surely could have used a better job but it’s a great improvement as it is. It still niggled at me that I would be so ignorant to leave my organizer behind. I had my list and the printouts for price matching but not my coupons. Oh, well.

I took the robe to Customer Service and while I was waiting to return it, a lady spied my Earthbound Farm tote and commented on how much she liked it. I told her I’d received an email earlier today that I’d won another one. I mentioned she could go to the site and sign up for their giveaways. She scrutinized the bag like she was memorizing it.

The new one will be the most cheerful one I’ve had. This is the third design. 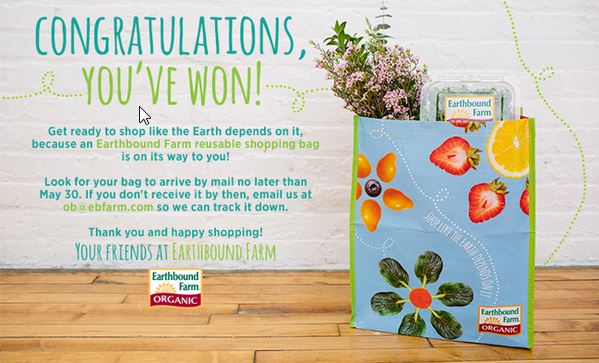 One of the price matches was for pineapple for 99 cents but I wasn’t inspired. Another was strawberries for $1.99 (I think) for 16 ozzies. The only thing I got was bananas at 44 cents a lub.

Back in the Twinkle section, the bags of her litter were so far back on the shelf I couldn’t reach them. I’ve been known to stand on a lower shelf to be able to snag something but it wouldn’t work this time. I walked past the aisles looking for an associate. No one was around. I went to the desk in the electronics department and the woman indicated she couldn’t help me because she was busy with something else. I said, “I need someone about seven feet tall to help me.” She flagged down a tall fellow and asked him to assist.

We went to the Twinkle department and he easily reached the bag of litter and pulled a couple more forward for other short people.

The whole reason for the town trip was to pick up Twinkle’s food. I was waiting for a woman with a shaggy dog to get her paperwork filled out. A man came in the door and cut in line. I was nice and waited patiently.

The lady moved off to the side, the man got his form, and I moved where the red-haired woman behind the counter could see me. She asked what she could do for me and I told her I was there for the two for the price of one sale. As usual, she said that was yesterday.

She had to get someone to bring the case of food to the front. While she was figuring what I owed, I asked if she had any coupons. I figured she didn’t but it didn’t hurt…No. They hadn’t had any because the person who was supposed to contact the company hadn’t done it. But, wait a minute!! She rolled her chair to the other counter and opened a drawer. Rummaging around, she pulled out a folded up slick piece of paper. She unfolded it, read both sides carefully and said, “This’ll work.” It took $5 off the total. Every little bit helps.

The a/c in the car was so nice. When I went in to feed the critters after I got home, it was hot and stuffy inside. It wasn’t much better in my house except the fans do stir the air around. It “only” got up to 100.4 in the sun at 2:57 p.m. TT. That’s two minutes earlier than yesterday for the high.

When the sun went down, the windows went up. I need to spray the tracks with WD-40 or something. My left wrist sort of smarted after I had to strong-arm one of them.

Twinkle has been nuzzling my legs. I guess it’s time to go break out yet another can of food for her. And the bank balance gets smaller.

6 Responses to Disturbed, Disgusted and Disgruntled