I stayed up too long watching the storm tracks. When it was evident nothing was going to come through and blow Twinkle and me away, I went to bed.

As is my custom most mornings, I was reclining on my waterbed, thinking and praying. The phone startled me when it rang. It was the woman from the hospital calling about my bill. I told her I hadn’t asked for a call back but she said she’d been looking at my account. She felt the ER co-pay should have been waived since I was admitted. I asked, “Medicare goes by the 72 hour rule, right?” “Yes.” “The hospital is critical access, right?” “Yes.” I let her know it appeared the claim had been processed correctly under CAH rules and I had planned to pay it. Well, she was going to call Humana and see if they would waive it in this instance. I’m to call her back tomorrow to get the answer. It would be nice to keep that $58.50.

When I was working at the hospital in the early days, the cashier receipted a $25 money order every month, without fail, from a man who’d been a self-pay patient. When he was down to the last $100, she went to the then administrator, told him the story and asked if she could send the payment back and tell him the rest had been forgiven. He agreed for her to do that.

Later, when the Mother Ship took over, we were to collect every penny we could. There would be no waiving of co-pays. At first, there were bonuses. If the goal was reached, each of the employees in Patient Access got $100. At the end of one year, it was $200. By and by, that went away but collecting didn’t. When I asked about an incentive, I was told everyone should collect simply because that was part of the job. I am impressed by a small facility who gives a collector the latitude to even try to waive a co-pay.

About an hour after that, DS1 called to check on me and let me know they were all okay. I saw DIL2 had posted some pictures on Facebook so I knew they weathered the storms, too.

I’d eaten my last banana yesterday so I took a shower to keep from stifling everyone. It was Time to Shop.

A few months ago, I had watched some episodes of Extreme Couponing. One woman had five computers so she could print coupons from all of them. Hmmmmm. I have a netbook. I went to coupons.com and the coupons I’d reached my limit on were printable! I printed them—and left them by the printer.

My sister called as I was getting dressed. She still couldn’t get the notebook to connect to the Internet. She’d taken her desktop and the notebook to the computer store and had everything she wanted to keep transferred. I hope that didn’t include the anti-virus program she’d been sold.

I told her that maybe she could buy a wireless router at a discount since the store is closing. The man informed her that wasn’t what she needed. Well, I’d be lost without mine. I don’t like being tethered. To each his/her own, though.

I was hoping it would rain while I was out and it didn’t. I got my shopping done (including buying an oscillating fan-on-a-stand) and headed on to Bi-Lo where I could get some So Delicious creamer. My coupons expire May 1. The shelf had none. There wasn’t even a place for it. There was a man checking the freezer case. I asked him if anyone was working dairy. He said he could help me. I asked about the So Delicious and he agreed there was none to be found. I told him I like that and the ice cream and I can’t get either. He took my name and phone number and said he’d look into it and give me a call. We’ll see.

When I pulled into the driveway, I parked beside my cousin’s house and went in to feed the critters. The Neighborhood Bully was trying to horn in on the Catz’ food so I sat down to guard until they could eat their fill.

It still hadn’t started raining when I pulled up to my house and unloaded. A little while ago, it was sprinkling.

I’d thought I’d wait until tomorrow to put the fan together but it was so stuffy in here, I went ahead and did it tonight. And guess who liked the box? 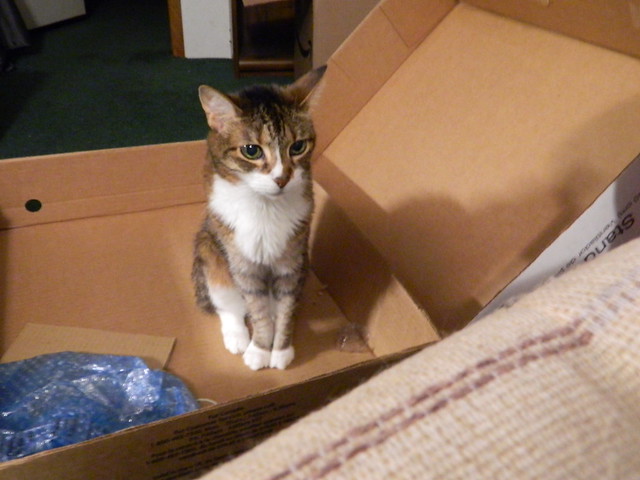 The fan is fanning and it makes it feel like it’s less than 78 degrees in here. I looked at portable air conditioners but they mostly have to be vented outside. I’d like to have something I could move from room to room.

Weatherbug has been silent. I’ve been praying for the people involved in all the devastation last night. Twinkle and I have been so fortunate. Now, if we will continue to be blessed.