It had rained a bit last night. I don’t think it amounted to much but I can’t say for sure. I haven’t replaced my rain gauge and I doubt I will. It hasn’t helped in the past to monitor it. The garden grew or didn’t in spite of it. Now that I don’t have a garden, the need for a gauge has dropped considerably.

The weather guessers predicted rain for today but the sun was out for the most part. There’s a tornado watch until 1 a.m. EDT which is midnight TT. There was a crash of thunder a few minutes ago but nothing since. Just to show who’s boss (I guess) there was a low growl as I was writing that.

I pulled up my Wundermap and these screen shots were in the space of less than 10 minutes. 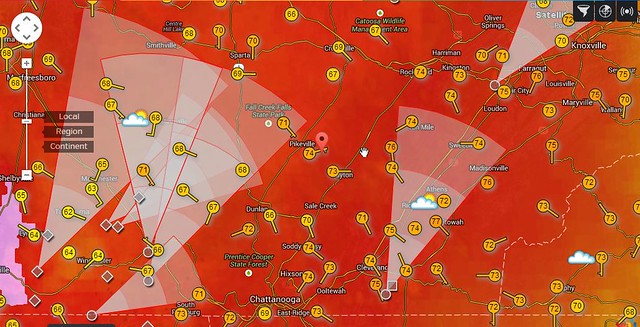 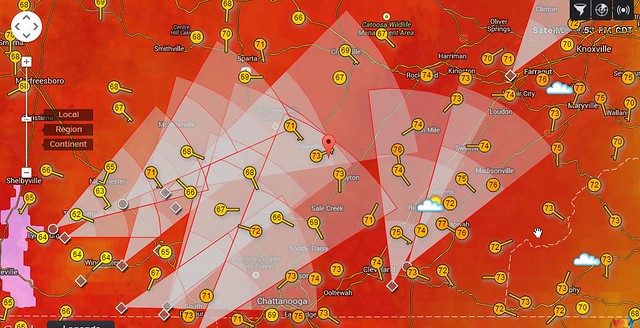 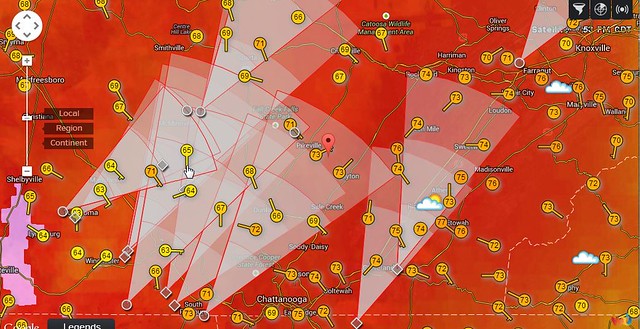 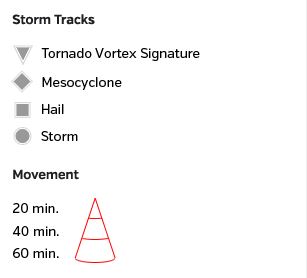 It’s fascinating to watch the changes but I’m tired and I won’t spend a lot of time doing that tonight.

Early this afternoon, I decided to take a bath. Before I got out of the tub, the phone rang. It went to voice mail. A couple minutes later, it rang again. Drying off, I went to see who had called. I thought it was the same person for both calls but it showed that it was DD and my sister.

Since DD and I would have a long conversation, I called my sister first. She’d found the DVDs that I’d sent over with the notebook and was wondering if one of them would fix her problem of not being able to get online. I told her those were for recovery only. She assured me she wasn’t going to do anything with them. She’d take the notebook by and have her computer guys check it out.

A call was ringing through so we hung up. I went in and got the number and called it back. It was Humana telling me (via a recording) that my appeal had been received and I should get a letter about it in a few days. When I got back to the computer, there was a voice mail saying, basically, the same thing except it said 60 days. Whenever it is, I hope it’s decided in my favor.

Next, I called to pay my co-pay for the ER but the regular person wasn’t in and the girl I talked to knew nothing about prompt-pay discounts. I’m to call back tomorrow. I asked her to note in the computer that I’d called today and she assured me she would.

THEN I called DD back and we talked for almost an hour. She and her boyfriend had gone to Portland and she said they’d walked 5-6 miles. Considering all the donuts they’d eaten, it was probably a good thing.

I told her I was going to work on getting WordPress installed so I can migrate my cousin’s web site to merm’s server. She advised me to go to youtube and watch a tutorial on how to do it. I flippantly said (imagining tossing my head), “The instructions are pretty straightforward.” She agreed that they were.

Well. I have spent hours trying to figure it out. I did go to youtube and I watched a tutorial. Problem is, I get everything uploaded, unzipped and where it’s supposed to be and that’s where it ends. I have no idea how to get to the index so I can install it. I’ve been counseled more than once that I’m on my own with this project and not to ask merm for any help. I’m in ‘way over my head so I’m thinking I’ll suck it up and pay the $100 or so a year for the server it’s on now. As of today, the account is current.

My sister called me this evening when I had just started eating supper. The computer had checked out okay (which I knew it should). The shop she took it to is closing its doors on Wednesday. She’d called her ISP. The tech remoted in on her old computer and reset the modem. At that time, she couldn’t get online at all. She plans to get her daughter to call the ISP again since it’s very hard for her to hear and understand on the phone.

Weatherbug has been chirping. The latest look at the radar map shows that much of the storm activity has passed. More is on its way. If I’m not carried off, maybe it will help me sleep better.

My roommate sent me a private message on Facebook telling me to take cover. Twinkle and I are as covered as we can be. It’s up to my angel to take care of us now.

I Have an Hour Longer to Live
I’m Still Here