In my last post, I told about the problem I had with my order of kala namak. The seller had responded, “i will send you a bag of the table salt version, i found some in our salt room” S/He may be related to Archy since little effort is wasted on punctuation and capitalization. I’d made sure it wouldn’t be the same grade as what I’d already received.

Right on time, it showed up in my mailbox yesterday. I’d thought it would be one 1 lub bag since that’s the way the No. 5 Crystal comes. The package seemed too heavy for that. Uh-oh. I was getting another 2 lub bag of the powdery stuff. I opened the box. I was wrong! and happily so!

Here’s what I had originally ordered (on the left) alongside what I originally got. 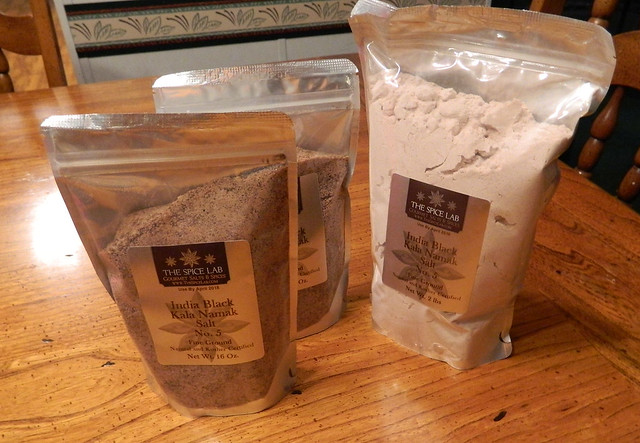 The difference is readily apparent. If Archy asks for a review, Archy will get a good one. And Archy sent not just one of the good stuff—TWO! I am well-supplied with kala namak. Rarely, I use it as an ingredient. I mostly hoard it for sprinkling but now I can go ahead and cook with it!

Twinkle has kept up her noshing ways. She polished off a whole can of food in 24 hours. If she keeps this up, I may have to (as my mother would have said) raise on her board bill. Now, if she’ll bulk up it will all be worth it.

I didn’t get around to working on the Sabbath School lessons. The urgency to get ‘er done kind of hit me in the face today when one of my friends handed me the study guide for the third quarter. I still have three lessons to do for the second one! I emailed the editor to guess what I have but she hasn’t responded. She’s ‘way in a different time zone so she may not have seen her message yet.

For a wonder, I was the first person in the church this morning and I was able to practice some. There was no song leader for the first song service for the second week in a row. The man who usually picks out obscure songs didn’t select anything during the second song service so we were safe.

The pianist had asked me to accompany her while she sang special music. She needed the pitch lowered considerably so that meant I’d be playing the organ. I can transpose somewhat but not as easily as my mother could and the organ has a transposer on it. She asked me to play more slowly than the music was written so she could catch her breath. That made me wonder if that’s why she slows the tempo of most of the songs—maybe she’s playing them like she would want to sing them. No matter how hard I try, I can’t get her to speed up. At any rate, we made it through the song okay.

Today was Communion. One of the ladies asked me to take part with her and another friend. I hadn’t been to the bathroom since before church started so I took a quick break. By the time I got back, the two ladies had washed each other’s feet. One of them washed mine. She’d washed two pairs but she said the important thing was that everyone’s feet got washed.

Some of the ladies started singing and I found the section of the hymnal and went to the organ to play along. Sad to say, when I started playing, they stopped singing. That wasn’t what I’d intended but there wasn’t anything for me to do but continue.

I played until the men came back in and the next part of the service began. I’ve been playing “Break Thou the Bread of Life” while the bread was being passed out and “There Is a Fountain” for the grape juice. However, the pastor has combined the passing out of the sacraments so I played a generic hymn softly.

The Computer Owner had told me she was going to talk to me tomorrow but she came up after the service was over and said she had decided it was time. She is having all sorts of trouble with her ISP. For a few days, she can get online just fine but then the connection will go down. I’d shared a rant about the service on Facebook and she’d read it. She was wanting to know if she should give up on that ISP and try to go with something else. The problem is, they are the only game in town. I suggested that maybe she could get a tablet and use it with a data plan. Since I know next to nothing about such, I referred her to someone who would.

She said her son told her laptops and notebooks will be phased out eventually. Maybe so, but desktops are still around. They are used mostly by businesses but a few people (like my sister) prefer them. As for me, I like a notebook because I do a LOT of typing and tablets just aren’t set up for that. I want a good-sized screen and a full-sized keyboard. I can use the keyboard on my netbook but I prefer having one that’s “normal”.

One of DD’s classmates needed info about the organ for insurance purposes. I got the folder out of the organ bench and it was a nostalgic moment. There was DH’s writing and the receipts for the payments he had made. That was back in 1983. There was also a letter from Jimmy Rhodes, the then owner of the company where we bought the organ. He had come out to our house after the truck had delivered it. He sat down and gave us an impromptu concert right there in our living room. I verified the date, put the folder back in the bench and came home.

It’s been a quiet afternoon. Today has been cooler than usual though it warmed up this afternoon. I’d turned Twinkle’s heating pad off and she refused to get on her chair so I turned it back on. She’s curled up and dozing. Since I got up before the timer went off this morning, I think I’ll go to bed and do the same.

Getting Closer
I Have an Hour Longer to Live

2 Responses to If the Salt Has Lost Its Savor…