When the Cavalry was here yesterday evening, I told him not to bother to fasten the panel back since it would be coming off again soon. I don’t know what else I said except that there are so many different kinds of water heaters, I didn’t know which direction to go. When my cousin came over before he left, she said she’d help me and she did.

His wife reads my blog. Evidently, she doesn’t tell him what she’s read. I know he doesn’t read it because of what he told my cousin a little while ago. But I’m getting ahead of myself.

This morning, I got up to go to the bathroom about daylight. I didn’t want to be awake that early so I figured I’d try out my new mask. I put it on and went back to sleep. I slept. And slept. And slept. When I woke, it was five minutes until nine, Tommie Time. Ten minutes later, my cousin called. I had to confess that, no, I hadn’t called about the water heater yet.

She came over and brought a coupon for $25 off the purchase price, provided it was over $250. Yes, it was. I called the store and put in my order, paying for it with my credit card. No, I couldn’t use the coupon on a phone order but if the person doing the pickup brought it in, they’d run it then. I called my cousin and she came back over and got it.

Later in the day, I heard the truck start. I was getting a new water heater! Not terribly exciting but a necessary replacement.

Another hour or so went by. I looked out and there it sat on the back of the truck. A bit after that, I saw my cousin and the Housesitter. I went out to visit. My cousin asked if I knew when the Cavalry would be here. I had no idea. Sorry.

When I came back to the house, it was stiflingly warm. I started coughing and felt like my toenails were going to come up. I opened the window in the utility room and decided I’d open the front door and get a breeze going through.

Twinkle was very interested in the open door. I’d moved the glass panel all the way up and the fresh air felt and smelled so good. She spied a cat on the deck. There was a period of hissing while she stood on high alert. 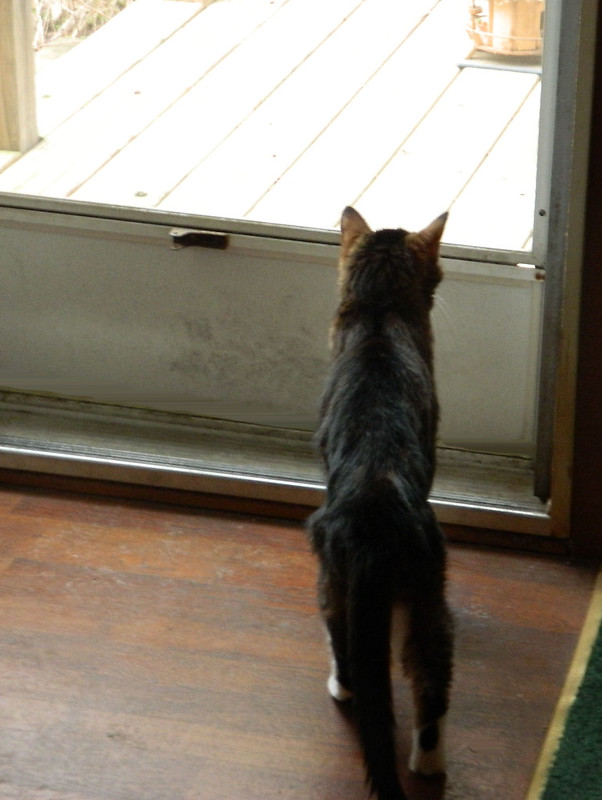 After she’d established her supremacy, she sat down and made sure the other felines knew who was queen. 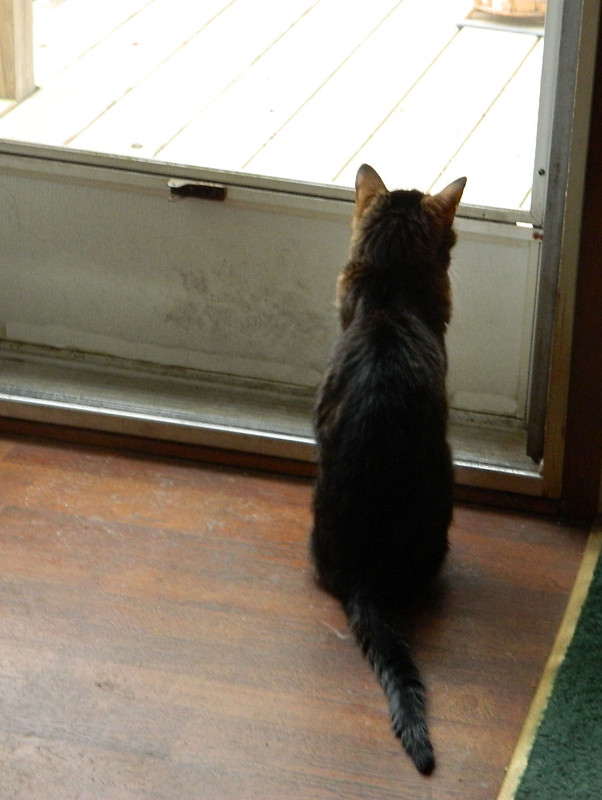 She had been ignoring her food all day but with the competition out there, she finished it off. I guess the novelty wore thin because she got on her chair and started dozing.

My cousin called to see if I’d heard from the Cavalry. No. Not a word. She’d tried to call his cell phone. No answer. I tried the house. Same. I finally texted him and told him to call my cousin.

Later, she called me back. He wouldn’t be here today. He’d gotten the idea some way that I had backed off getting a new water heater. HUH? I’m no expert, but it seems to me that when one is leaking, it can’t be fixed and the only thing to do is replace it. Now I remember I’d mentioned I’d have to eventually tap into my meager resources to cover my expenses but that didn’t mean I was going to put off getting a replacement now. I can put things on my credit card and still have time to cover it.

Oh, well, no use stewing over it. That won’t change anything.

In the meantime, my sister has come to the realization she does need to do something about her computer situation. She consulted some computer guys and was told her computer isn’t worth upgrading. They said she could get another computer with Windows 7 for around $600. What?? That would buy more computer than she’d ever need.

She asked me to hunt down a good deal for her. Being who I am, I didn’t even consider a desktop. I’m portable all the way. I found a bangin’ new open box notebook with Windows 7 for $459! AND free shipping! It had everything she could possibly want. Then she dropped the bombshell. She wants another desktop. When I found a desktop for her (I explained she’d probably have to buy a new monitor, keyboard and mouse), she didn’t seem overjoyed.

I had my fill early on of crawling around plugging and unplugging desktop computers. My first Windows desktop was my last. I bought a laptop and thought I’d made a big mistake until I started using it and then I was hooked. Since then, I’ve owned a myriad of laptops, notebooks and netbooks. No more desktops for me. Thanks anyway but if someone gave me one, I’d sell it and put the money on my new water heater.

My cousin called an hour or so ago. The Cavalry had gotten in touch with her and said he thought I had decided against getting anything right now. He could be here first thing in the morning. She put him off until she gets home tomorrow afternoon. She thought I wouldn’t be up as early as he wanted to be here. I told her she has a key to the house. She could let herself in and I’d be sprawled on the bed with my mask covering my eyes.

Well, I’d gone ahead and cleared a path to the utility room. I’ll leave things as they are. No use moving them back.

It Comes In. It Goes Out.
In Hot Water

2 Responses to How’s That?