For years, I’ve used my last spinach containers to store my washed-and-ready-to-eat romaine. I’d scrub them out and, occasionally, give them a good wash with water cut with a little bleach. Friday, I got the bright idea of putting a set in the dishwasher. Surely, they’d be safe in the top rack and they’d come out all shiny and almost new.

WRONG! When I opened the dishwasher Sabbath morning, here’s what I found: 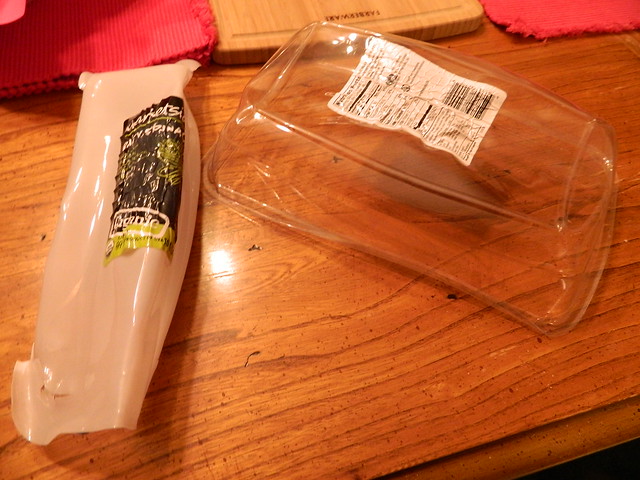 You can’t really tell it from the picture but the container is so warped, there’s no way I can use it. You CAN tell the lid is history. It’s just a lump of plastic. Well, at least it wasn’t something that can’t be thrown away without regret.

Almost noon TT, I was summoned to my cousin’s house. She and the Housesitter had been to gather up belongings to go through. The main reason for the visit was to get the old computer to “talk” to the printer. Come to find out, it isn’t compatible with the new printer so there’s little use to even try so I didn’t. The Housesitter has been trying to give an older printer to my cousin for years and I think we finally convinced her she should take it.

The Housesitter was going through a stack of clothes and gifted me with three jackets, five tops and 14 hangers. I’d been planning to go to Goodwill to replenish my wardrobe but there will be no need now. Maybe a skirt or two will be necessary but no big outlay.

I loaded up and came home, exercised, then checked my email. My sister had inserted the batteries in both the notebook and the mouse but nothing was working. She didn’t realize shutting the computer causes it to hibernate. Also, she was unaware there’s an on/off button on the mouse. When the computer came up and the mouse was turned on, she started exploring.

I didn’t know it wasn’t in the office where she plans to have it. The power bar in there doesn’t have any free outlets so she’ll have to either get another larger one or a small one and daisy-chain it. She was in the kitchen. With no wireless, she didn’t have access to the Internet. With some encouragement, she poked around a little. I had her look at the start menu and she discovered she has GAMES!! She’d taken solitaire off her desktop computer and regretted it. Now she has it back. I was thinking Russcell was solitaire but it isn’t. It’s free cell and I don’t have it any more. Contrary to current belief, you can’t find everything on the WWW because I’ve looked.

We played solitaire simultaneously. I think she was dealt a better hand than I was. Since then, I’ve played a couple more games and finally won. It’s tedious to play the Windows version but if she’s happy with it…

I’ve gotten next to nothing done today. I’m still on the third lesson for the second quarter.

My roommate from academy forwarded the alumni update letter to me. It was nice to read what has happened with some of my old friends and unsettling to see how many have passed on. The 50th reunion is next month and, no, I won’t be going. I didn’t graduate from there so I attended. I’m not an alumnus. Neither am I alone in not going which is nice. Getting together when we feel like it is one thing. Doing it as a group is another.

Well, I’ve pulled ahead in both Wordscraper games but neither one is over yet. No telling what trick Genese will pull out of her hat.

Twinkle is back to eating me out of house and home. I counted the cans of food she has left today. They’re down to seven. That used to be three weeks’ worth, at least. Now, it might be a week.

Been There, Done That
Just a’Swangin’

4 Responses to Nice in Theory