I’ve had to eat my words before and I’m doing it again. Pax finally showed up in earnest last night before I went to bed and started dumping snow. I could see it falling in the light in front of the garage and I took some pictures but I needed a different setting on the camera plus a steady hand.

I was wondering about my sister in North Carolina so, a few minutes after 9, I called her. I wouldn’t normally call anyone at that hour but I kind of know her routine. She wouldn’t be in bed yet and she wasn’t. I was glad to find that she had power and was snug, warm, and well-fed. And, yes, she had a good supply of toilet paper. She was watching the Olympics (I’ve been spared because I don’t have TV) but she was planning to record the figure skating which is really the only thing she’s interested in. We talked for about a half hour before we said our good nights.

My plan to get to bed right away kind of evaporated. I’d readied myself to crawl into my earthing bag at 11. I was reaching to turn off the power bar that has both my waterbed heater and salt lamp plugged into it when the lights blinked. They blinked again and went completely off. I groped around and found my flashlight. Not knowing how long the power might be off, I shut down both my notebook and netbook and powered off the UPS to conserve the battery. I wasn’t taking any chances of not being able to communicate come morning.

I didn’t really sleep. I dozed. Then about 1 a.m. I heard things coming on. The vaporizer started bubbling and the printer clicked. I was going to leave the UPS and netbook off until I thought I might need to use the phone so I brought them both back up. The modem had a red light for too long to make me comfortable but switched to green by and by. I tried the phone and got a dial tone. I went back to bed and slept well the rest of the night.

What a change when I got up! It was amazing! It was the first real snow we’ve had for several years. I don’t know if I have a ruler or not. If I do, I don’t know where it is. I took a table knife, stuck it in the snow and measured it. We had about 7.5″.

After my bath, I put on long johns under my sweats and went out to take pictures. The titles on these will be self-explanatory. (Put your pointer on the pictures to see them.) 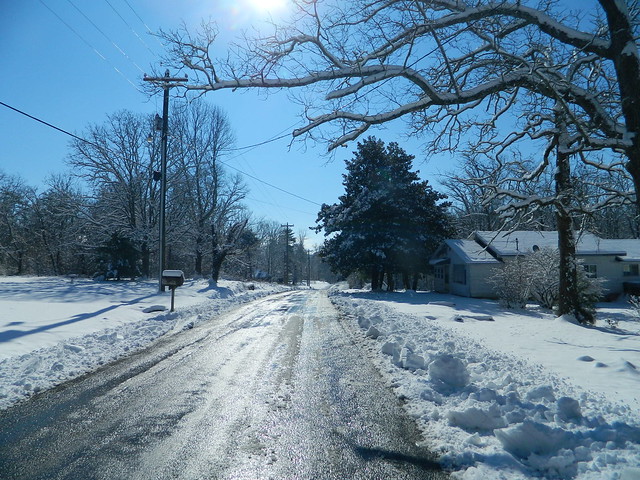 A note here—the county doesn’t clear the secondary roads like this one so I’m sure one of the neighbors got out early with his tractor and blade to do it. He’s done it before and it’s a real benefit to everyone on this short stretch. 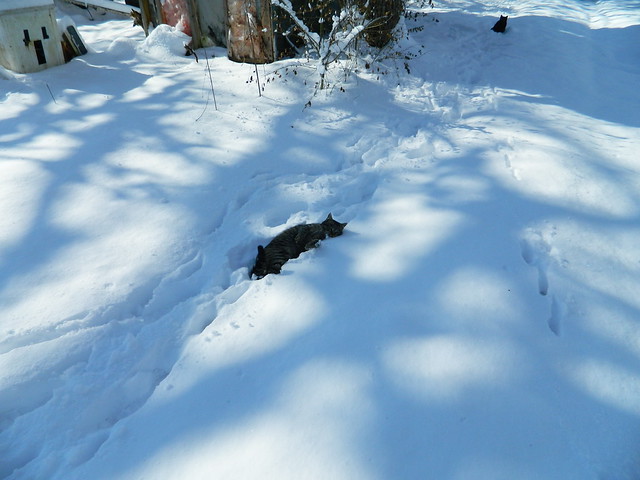 When I got all my picture-taking done (and these are just a few of them), I took a bowl out and got some fresh, clean snow for snow cream. It was my first course at breakfast. The color is from the whole organic sugar I used. Since it was a special occasion (the first time in recent memory to have snow cream) I put in a drop or two of DD’s vanilla. It was delicious!

The snow isn’t lasting long. There’s nothing quite so sad as used snow. This was a bit past mid-afternoon. 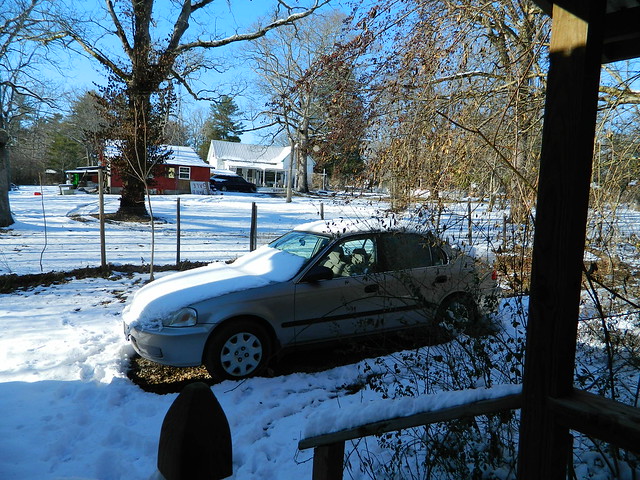 And, of course, the cats were here looking for something to eat.

It’s been quite a day. The decent snow and sunshine have perked me up. I did laundry and dishes and even did another blog post about a recipe DD had referenced on Facebook. My sister called from her daughter’s place to make sure the power was back on and I assured her it had only been off for two hours. It was nice of her to be concerned.

My cousin has traveled north a bit and is visiting friends. She has computer access there so she’s posted some on Facebook. Yesterday, she told me about the place where our friend has moved. She’s living close enough to water that they are visited by alligators. The place is tiny which meant they were dodging each other. It has a 10 gallon water heater so there were no long showers. Get wet, soap up, shower off and that was it. She does have all the utilities included in the monthly rent except for gas. WiFi is furnished, too, so it isn’t a bad deal.

Well, it’s been a long day and I’m tired once again. I had an email from the editor that the inside stories weren’t showing up on the lessons. I could have sworn I’d uploaded them but I guess not. After I did, she said she hoped I’d used the latest files because she’d worked on the headers to optimize them for search engines. Well, NO. If I’d done that, I would have wiped out all my work and this time, I figured it took precedence. My apologies but I had to do it.