This isn’t new with me. I’ve wondered about it for years. We stay up too late. We have labor-saving devices that create more work. We don’t have to do anything but flip a switch to have light, turn a dial to heat the joint, or push buttons to wash our clothes, cook our food, or curl our hair. The alternating current that powers it is endangering our very existence. Don’t get me wrong. I use electricity but I’m becoming more aware of what it can do to me as well as for me.

If we had direct current like much of the world does, it would be a whole lot less dangerous but, for some reason, the US of A settled on a different way to deliver POWER. Why? You tell me. I’m sure it isn’t a conspiracy to sicken the population. No one knew at first that there was a danger. When something is discovered or invented, it can take years for any negative impact to show itself. Evidently, the dark side of electricity has been known to some for a long time but those in a position to let the rest of us in on the secret are saying, “Don’t worry. It isn’t hurting us.” Kind of like, “It’s never rained. There will be no flood.” Is it because of the havoc it could wreak with the economy?

And now that I’m Going Green, I’m finding out the fluorescent bulbs I’ve been using to replace the incandescent ones emit ElectroMagnetic Frequencies. I can’t win for losing. What can I do? Some time back, my sister e-mailed, tongue-in-cheek, “We have an oil lamp if you hafta quit using ‘lectricity altogether—also lotsa candles. They’d give off some heat, too!” Then she added, “(I don’t understand what it’s all about…)” That makes two of us, sister dear. I’m trying to learn and put what I’m learning into practice as much as I can. But here I sit in front of my computer under a fluorescent light (though, to my credit, it’s full-spectrum) (and that’s probably bad in some way, too).

Wireless is another no-no. We can do without electricity if we want (and I don’t want) but wireless is all around us whether we like it or not. It comes from cell phones, cell towers, WiFi, and all other wireless devices. I must admit, I have a wireless router in my house because I like not tripping over cords. Which is worse? The effects from that or a broken hip? It’s a toss-up.

And then there are “smart meters” from the electric company. If you don’t know what kind of meter you have, take a look. If it has a digital display, it’s a smart meter. I’ve given up on googling for information on the pros and cons. There are just too many and I’m not willing to take my sister up on her offer just yet.
Hybrid and electric vehicles? Yet another source of EMFs.

If you’re wondering what problems EMFs can cause, take a look at this list—and it isn’t complete.

A few more (in case you wondered) are ADHD, asthma and allergies—and serious diseases such as cancer, Alzheimer’s, high blood pressure and diabetes.

Now for the sales pitch. Yes. I am an affiliate for a company that sells products to protect you and me from the dangers of EMFs. People will scoff and say they don’t work but I’ve been using two of them since 2010 (the Home EMF Protection and I wear a Nova Resonator 24/7). When I started using them, I could tell a difference in the way I felt. Now, it just feels normal.

EarthCalm, Inc. has been around for more than a quarter of a century. Their products aren’t cheap but neither are trips to the doctor or hospital. They have a 90 day money back guarantee. Try getting your doctor or hospital to agree to something like that. You can test a product against any symptom you have and watch to see the difference. Your money back if you’re not satisfied—no questions asked. Oh! And now their Nova Resonators come in a variety of styles including the all silver one like I wear. I have my eye on the Omega WiFi. They even make EMF protection for children.

If you are interested in cutting down on your exposure to the “electrosmog” that’s everywhere, take the step and make the investment. 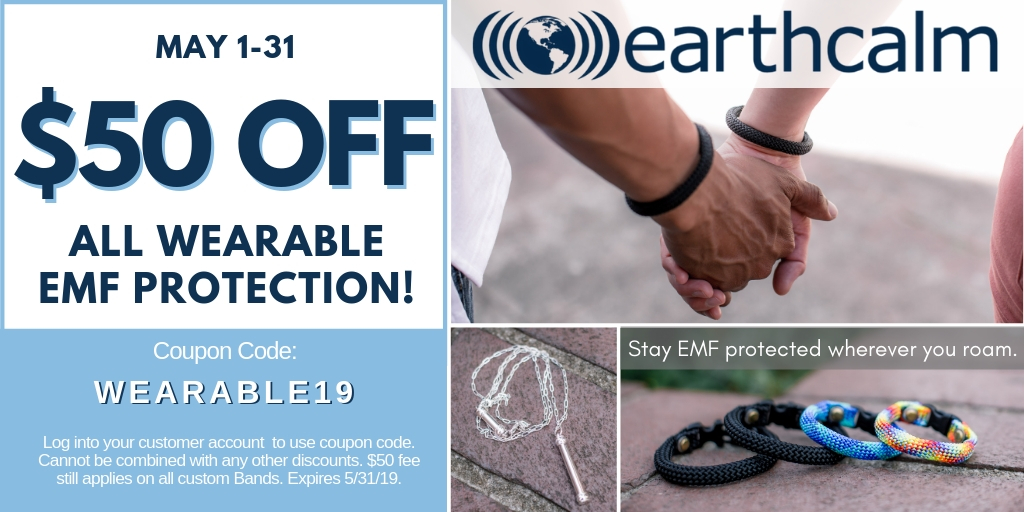 My Week: A Better Mousetrap
My Week: Threescore and Ten Minus One