I crawled out of bed at 6:30 this morning and measured myself. I’m down another 2″. I was also down another lub. That makes 34 lubs since mid-May.

I did my vision therapy, BF’ed, did 60 squats, 20 wall pushups, and 20 presses. I was pretty much out of breath when I finished.

Breakfast was a banana/mango/pineapple smoothie and it was delicious. I also had the five (or was it six?) figs from last night. I found that they had ripened some more overnight and were sweeter than when they are first picked. I’ve gotten several off the bush/tree today and am waiting until tomorrow to eat them.

Here’s a cicada shell I found under one of the leaves.

I got to the berry patch about 10 and was preparing myself for the onslaught when the lady of the patch drove up. She and I got into a conversation and it was a bit later when I finally went out to pick. I was working on my second gallon when she came looking for me. She said that another person had come to pick and couldn’t find any berries. I was at the back of the patch and they were hanging thick. She was asking me about our school and started picking and putting her berries in my container. She had asked me if I were just picking the big berries. I told her I was picking anything that looked good. Well, any color must’ve looked good to her. When I got home going on 2 o’clock, I had to go through the ones that she had picked and pick them again. It was nice of her to help me, anyway. I got plenty of vitamin D 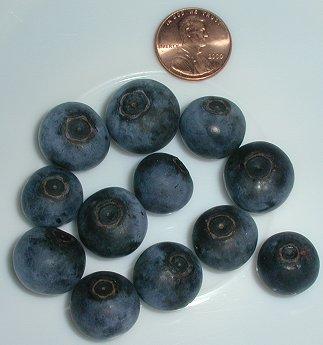 When I got home, I took a shower and ate a big bowl of watermelon.

I’d recorded my Sunday morning shows so I sat down and watched them. Some of it, I just listened to.

About 4, I blended up some Cauliflower Soup for Martians and they must have cast iron stomachs. I ate one bowl full and my innards were burning. To settle that down, I had some Mock Salmon Pate on romaine leaves. I waited a little while and had some tomatoes–one yellow and one red.

I was going to have a banana/pineapple smoothie about 8:45 but my stomach was satisfied after I ate a nectarine. My calorie count is 1000 even with 17% fat and 9% protein. The fat would have come down considerably if I’d had the smoothie.

Better get to bed!